THIS IS AN ADVERTISEMENT

When You Need Results.
Contact Us Now
For a Free Consultation

COVID-19 Update: During this unprecedented time, Garmer & Prather is continuing to represent our existing clients and accept new clients. In accordance with CDC guidelines, our office is not accepting in-person visitors and most employees are working remotely. You may reach us by calling (859) 254-9351 or by using the contact us page on this website. We will get back to you as soon as possible, but we ask for your patience during this unprecedented time, while we continue to work vigorously in the pursuit of justice for our clients. 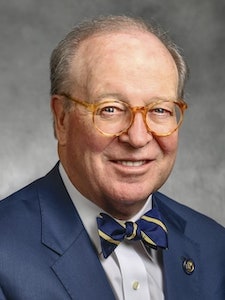 In a career spanning 45 years, Bill Garmer has had extensive courtroom and appellate experience. Not only has he secured many successful settlements and verdicts for his clients, but his successful cases have often led to groundbreaking decisions.

In 2016, Bill Garmer successfully argued a landmark case before the Kentucky Supreme Court, Saint Joseph Hospital v. Thomas. In that case, Supreme Court affirmed a jury verdict for punitive damages of over one million dollars for the family of a man who died as a result of medical malpractice, even though the indigent victim had been awarded only a small amount of compensatory damages. In its opinion, the Court changed the law’s focus in punitive damages cases to more thoroughly consider the fact that the conduct of the defendant was "reprehensible."

In Hilen v. Hays, as the plaintiff's attorney, Bill earned a victory before the Kentucky Supreme Court leading to the adoption of comparative fault, a fundamental change to Kentucky’s system for compensating injured parties. Additionally, as the plaintiff's attorney in Williams v. St. Claire Medical Center, Bill's successful argument in the Kentucky Court of Appeals led to the decision recognizing both the doctrine of apparent agency for independent contractors in hospital cases, and the independent liability of hospitals for failing to follow their own policies and procedures. Bill was one of five attorneys selected to the trial team to represent the families of the passengers of Comair Flight 5191, which crashed on takeoff from Lexington, Kentucky, in August 2006. Bill recently represented the family of a victim of nursing home abuse resulting in an $8 million jury verdict in Louisville.† As a plaintiff's lawyer, Bill is dedicated to protecting the rights guaranteed to every citizen by the Constitution.

Bill is a member of a number of professional organizations, and has held influential positions within these organizations. He is a Fellow of the American College of Trial Lawyers and the Melvin Belli Society, a recognition of attorneys who have “distinguished themselves as trial lawyers” and are “dedicated to the principles of education on an international basis.” Bill is a member of the American Bar Association; the American Association for Justice, where he has served as Chair and Vice Chair of the Council of State Presidents and was on the Board of Governors from 1998 through 2010; the Kentucky Bar Association, where he was been a member of the Board of Governors from 2011 until 2015, vice president in 2015-2016, president elect in 2016-2017, and President in 2017-2018; the Kentucky Bar Foundation; the Kentucky Justice Association, where he has served as President, Vice President, Secretary, and Treasurer, and is presently on the Board of Governors; the Trial Lawyers for Public Justice; the Southern Trial Lawyers Association; and the Federal Bar Association.

In addition to his professional memberships, Bill has received outstanding recognition within the legal community. In 1998, he was the recipient of the Kentucky Justice Association's Trial Lawyer of the Year Award. Martindale-Hubbell rates him AV-Preeminent®*, the highest rating an attorney can receive. He has been listed in the publication The Best Lawyers in America since 1987, Who's Who in American Law since 1991, and named to Kentucky Super Lawyers since 2007. Since 2019, Bill has been named to the "Super Lawyers: Top 10 Kentucky lawyers" list, ranked number 3 on the list in 2019 and number one in 2020; before that he was named to the "Super Lawyers: Top 50 Kentucky Lawyers" list ten times. He has been an adjunct professor at the University of Kentucky College of Law in litigation skills since 1981 and in healthcare law since 2003. He also has been a guest lecturer in Continuing Legal Education programs in Kentucky and around the United States.

Bill served on Active Duty in the United States Air Force as a Staff Sergeant from 1969 to1973. He was formerly a Deacon, moderator of the Diaconate, and an Elder in the First Presbyterian Church of Lexington, Kentucky, and is now a member of Second Presbyterian Church. He has served as a Board Member of both the Opportunity Workshop in Lexington and the University of Kentucky College of Law Alumni Association, and is also member of the Visiting Committee of the University of Kentucky College of Law. He was chairman of the Kentucky Democratic Party in 2004. Bill is a member of the Board of Governors of the Prichard Committee for Academic Excellence. He is also a member of the Honorable Order of Kentucky Colonels.

† This case was settled for a confidential amount prior to an appeal.

University of Kentucky College of Law Alumni Association
Board Member

*Martindale-Hubbell is the facilitator of a peer review rating process. Ratings reflect the anonymous opinions of members of the bar and the judiciary. Martindale-Hubbell® Peer Review Ratings™ fall into two categories - legal ability and general ethical standards. AV®, BV®, AV Preeminent® and BV Distinguished® are registered certification marks of Reed Elsevier Properties Inc., used under in accordance with the Martindale-Hubbell certification procedures, standards and policies.

Contact Us
Practice Areas
Client Reviews
★★★★★
I was involved in a head on collision with a school bus. During my rehabilitation, a friend suggested that I needed a law firm to invistgate. After much research was done by my friend, I was advised to call Garmer & Prather, PLLC ATTORNEYS AT LAW. Working with Garmer and Prather during this difficult time was truly a blessing. They are kind, compassionate, studious and have the utmost diginity. It was my pleasure to work with such an oustanding law firm. I very highly recommend Garmer & Prather Law Firm for any needs regarding personal injury representation. P.M.
View More
Submit a Law Firm Client Review